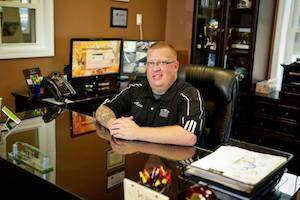 When Adam Olschewske launched his home renovation business on Jan. 1, 2000, he wasn't worried about any potential Y2K chaos.

“I didn’t even have a computer,” he said.

He had a toolbox, work clothes and a pickup truck. Have hammer, will travel.

Now, 18 years later, his business, Marshall Exteriors, is reliant on what the computer programs say, is ready to move into a second location in the village of Newark, is enjoying dramatic growth in work orders, and is mapping out potential expansion to Syracuse, Buffalo and even beyond state lines.

Not bad for a venture that started out in Olschewske’s living room in a rented duplex in the Seneca County village of Waterloo, a business that didn’t really even have a name.

Try to fit that on the door of a truck. And the acronym, AAMFPNWD, wouldn’t really work either, considering it looked like nothing more than letters on a Scrabble tray.

Oh, how times have changed. Olschewske has since relocated from Waterloo to Newark, christened the business name Marshall Exteriors, built a facility, grown to 21 full-time employees and provided regular work to another 80 to 100 “team members.” They are the independent contractors who are on site doing the re-shingling or roof repairs, installing windows or siding, or building sunrooms and decks.

But why is an Olschewske-owned company called Marshall Exteriors? For one, Olschewske doesn’t exactly flow off the tongue.

“You can’t spell it, you can’t find it (in any directory of contractors) and when you do find it, you’re skipping right over it,” he said with a smile.

So he chose to use his wife’s maiden name. After all, Colleen Marshall was the reason he moved to Newark in 2003. They have been married 14 years. 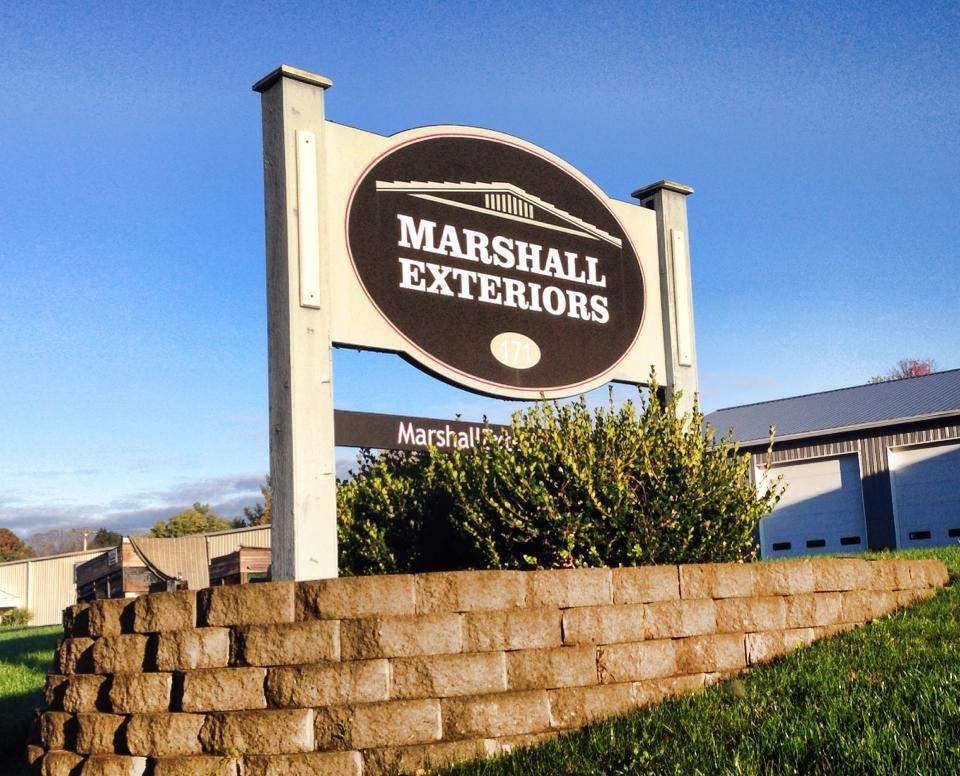 She was my motivation to be a better person, to have a means to take care of her,” he said. “She was kind of the spark that lit the fire.”

Now that the business flame is burning brightly, there are folks around town that think his name is Adam Marshall. People on the street, people at meetings, people on job sites. “I’ve had people who have worked here for years who wouldn’t know my last name,” he said.

Those employees do, however, know how to make house renovations that meet customer specifications. In 2017 the company was honored with a Torch Award for Ethics from the Better Business Bureau. It’s very much a source of pride for the company, which specializes in roofing, siding, windows, doors, decks, insulation, basement refinishing and sunrooms and awnings.

“It’s all about the customer,” Olschewske said. “I always ask, ‘What would Wegmans do?’ Would they allow a cashier to wear a beer shirt? Why would I have any different standards than a business that’s a Top 10 business?

“How would I want to be treated? You answer the phone, you show up when you say you will, you give them a price and you do what you say you’re going to do.”

Perhaps that’s why Marshall’s workload grew 70 percent last year, to around $3.9 million in gross revenue. It’s also why they’re projecting revenue to grow to $5 million in 2018. In 2012, gross revenues were around $1.2 million.

Those are significant growth numbers for a business that serves much of Monroe, Ontario, Livingston, Seneca and Wayne counties. But Olschewske said it’s not how he measures success.

“My milestones are not ‘Adam did this’ or ‘Adam did that’ — it’s when my employees achieve a personal goal in their lives, like buying a house,” he said.

Growth isn’t always easy in the construction and remodeling industry. “Every single person with a hammer and a beer is a competitor,” Olschewske said.

Still, big-time advancement was all part of his grand vision. When he built his current facility at 171 West Shore Blvd. in Newark in 2008, he included six offices and a conference room.

“People asked, ‘Why’d you build those offices?’ and I said, ‘because I’m going to fill them.’”

“I just inspect what I expect,” Olschewske said.

And he also inspects the data. Just as the sports world has embraced analytics when building a roster and implementing a style of play — think Money Ball— Marshall Exteriors is letting numbers guide decisions.

“I wanted to change the stereotype of who construction people are, that they’re just guys with a tool belt, a tape measure and a pickup truck,” Olschewske said. “We’re a completely data-driven business. We track everything and use customer relationship management software. It’s incredible how accurate it is. It allows you to see the turn before we’re there.”

The current space no longer fits the needs. The warehouse will stay put but Marshall’s just announced it will be moving the offices and showroom to the former Rite Aid building at 135 E. Union St., a 16,000-square-foot facility that is double the company’s current space.

“We expect anything that Adam’s involved in will be pretty exciting,” village mayor Jonathan Taylor said. “And so much business is driven through them, so that brings a lot of people to Newark.”

The new site will house offices, a training theater and a 5,600-square-foot showroom with virtual-reality stations. The project cost will be approximately $1 million, said Olschewske, who designed the blueprints.

“The showroom will be bigger than any of our wholesalers’ showrooms,” he said. “I reached my potential here (at the West Shore Boulevard facility) so then it was, ‘how do we push forward?’ Employees don’t want to work for a company that’s not moving forward. If you’ve reached what you’re going to be, then it becomes mundane.” Olschewske intends to keep reaching.